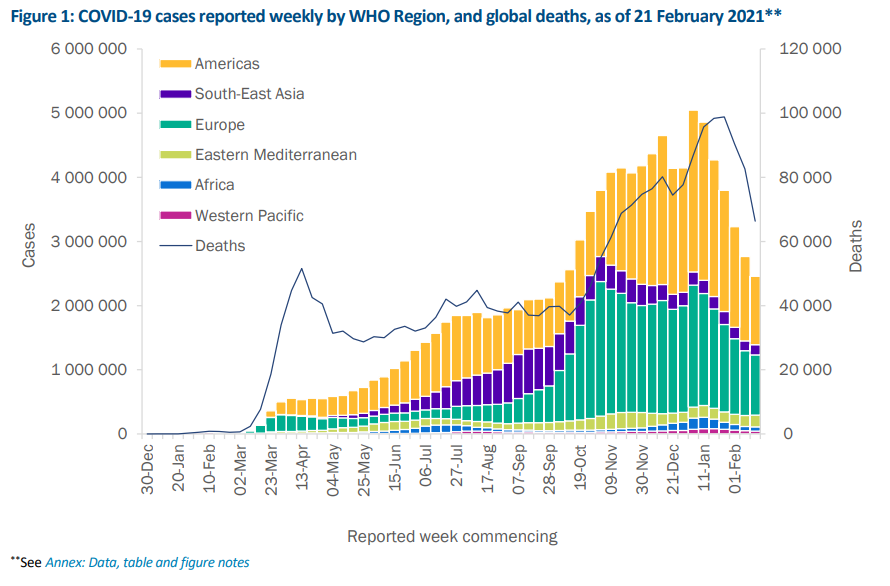 Data as received by WHO from national authorities, as of 21 February 2021, 10 am CET

The number of global new cases reported continues to fall for the sixth consecutive week, with 2.4 million new cases last week, a 11% decline compared to the previous week (Figure 1).

The number of new deaths also continued to fall for the past three weeks, with nearly 66 000 new deaths reported last week, a 20% decline as compared to the previous week.

A total of four out of six WHO regions reported declines in new cases (Table 1), with only South-East Asia and the Eastern Mediterranean regions showing a small 2% and 7% increase, respectively.

The Americas continue to see the greatest drops in absolute numbers of cases. Meanwhile, the number of new deaths declined in all regions apart from the Western Pacific (6% increase).

WHO relies on the Strategic Advisory Group of Experts on Immunization (SAGE) to issue policy recommendations on COVID-19 vaccination to Members States. Through an established methodological process rooted in evidence-based medicine, and with the support of a dedicated COVID-19 vaccine working group,

The last of these reviews examined AstraZeneca core clinical data from the Phase 1-3 clinical trials. The WHO interim recommendations that ensued apply to AZD1222 (named generically as ChAdOx1-S [recombinant]) vaccine against COVID-19, developed by Oxford University (United Kingdom) and AstraZeneca, as well as to ChAdOx1-S [recombinant]) vaccines against COVID-19 produced by other manufacturers.

These include the Serum Institute of India and SK Bioscience (South Korea), both of which rely on the AstraZeneca core clinical data and have demonstrated equivalence in their regulatory review. It will be the responsibility of regulatory bodies and WHO’s Emergency Use Listing (EUL) process to ensure that products emerging from different manufacturing facilities are equivalent.

This website uses cookies to improve your experience while you navigate through the website. Out of these, the cookies that are categorized as necessary are stored on your browser as they are essential for the working of basic functionalities of the website. We also use third-party cookies that help us analyze and understand how you use this website. These cookies will be stored in your browser only with your consent. You also have the option to opt-out of these cookies. But opting out of some of these cookies may affect your browsing experience.
Necessary Sempre abilitato
Necessary cookies are absolutely essential for the website to function properly. These cookies ensure basic functionalities and security features of the website, anonymously.
Functional
Functional cookies help to perform certain functionalities like sharing the content of the website on social media platforms, collect feedbacks, and other third-party features.
Performance
Performance cookies are used to understand and analyze the key performance indexes of the website which helps in delivering a better user experience for the visitors.
Analytics
Analytical cookies are used to understand how visitors interact with the website. These cookies help provide information on metrics the number of visitors, bounce rate, traffic source, etc.
Advertisement
Advertisement cookies are used to provide visitors with relevant ads and marketing campaigns. These cookies track visitors across websites and collect information to provide customized ads.
Others
Other uncategorized cookies are those that are being analyzed and have not been classified into a category as yet.
ACCETTA E SALVA